This is a real secret, we very rarely see another visitor. Directly under the chimney of Fawley power station, the anchorage is sheltered and accessible to boats up to about 1.5m draft (mid to high tide). Anchor in the middle of the pool.

You can get ashore at all but dead low water on the beach to the south of the dock entrance (don't use the pier as it gets locked and don't use the slip to the north of the dock entrance, it's very muddy low down; and you may need boots). The area is a noted and protected area for all manner of wading and shore birds including Herons and Egrets. It's also a very good vantage point to watch the cruise liners and general shipping using Southampton Water.

Walk south east from Owers Lake along to Calshot (See the Map below), with it's activity centre, castle and lifeboat station. Don't be put off by the guard at the gate, he's there to stop unruly car parking. The lifeboat members are usually pleased to show you round the station. The activity centre has a cafe/bar in one of the big hangars which you may find open. If that cafe is closed there's another overlooking the beach back toward the village of Calshot. They do a splendid all day breakfast (cooked by the self styled Grumpy Grahame).

Walking north west from Owers takes you across fields to the watermill at Ashlett creek.

This year (2008) it appears the creek has been re-dredged as there's rather more depth of water over an unnaturally flat bottom down the centre of the creek. This seems to have left fairly steep sided banks of mud around the edges so anchoring needs to be fairly accurate. It may also mean that your stay could be interrupted by a bunker barge bringing in oil or materials to the power station (altough we have never seen any commercial vessels in there). Another consequence of the dredging seems to be that the holding can be a bit 'iffy', it's worth putting the engine astern to check you won't be going anywhere unintended.

2013 and the local sailing club has closed down, all the moorings have gone and Fawley powerstation itself is due to be decommissioned. Let's just hope this lovely spot doesn't get silted up now that there is no incentive to keep it dredged.

2018 It seems that Vestas who build massive turbine blades on the Isle of Wight have built a facility on the Fawley power station site to paint those blades. This means that the ship 'Blade Runner' is likely to be making frequent journeys from the Medina to Owers Lake. For us, it means that it would no longer to be safe to anchor in the middle of the pool because it has once again become a fairway with commercial traffic. For those able to take the ground there will still be room to anchor at the edges of the pool. 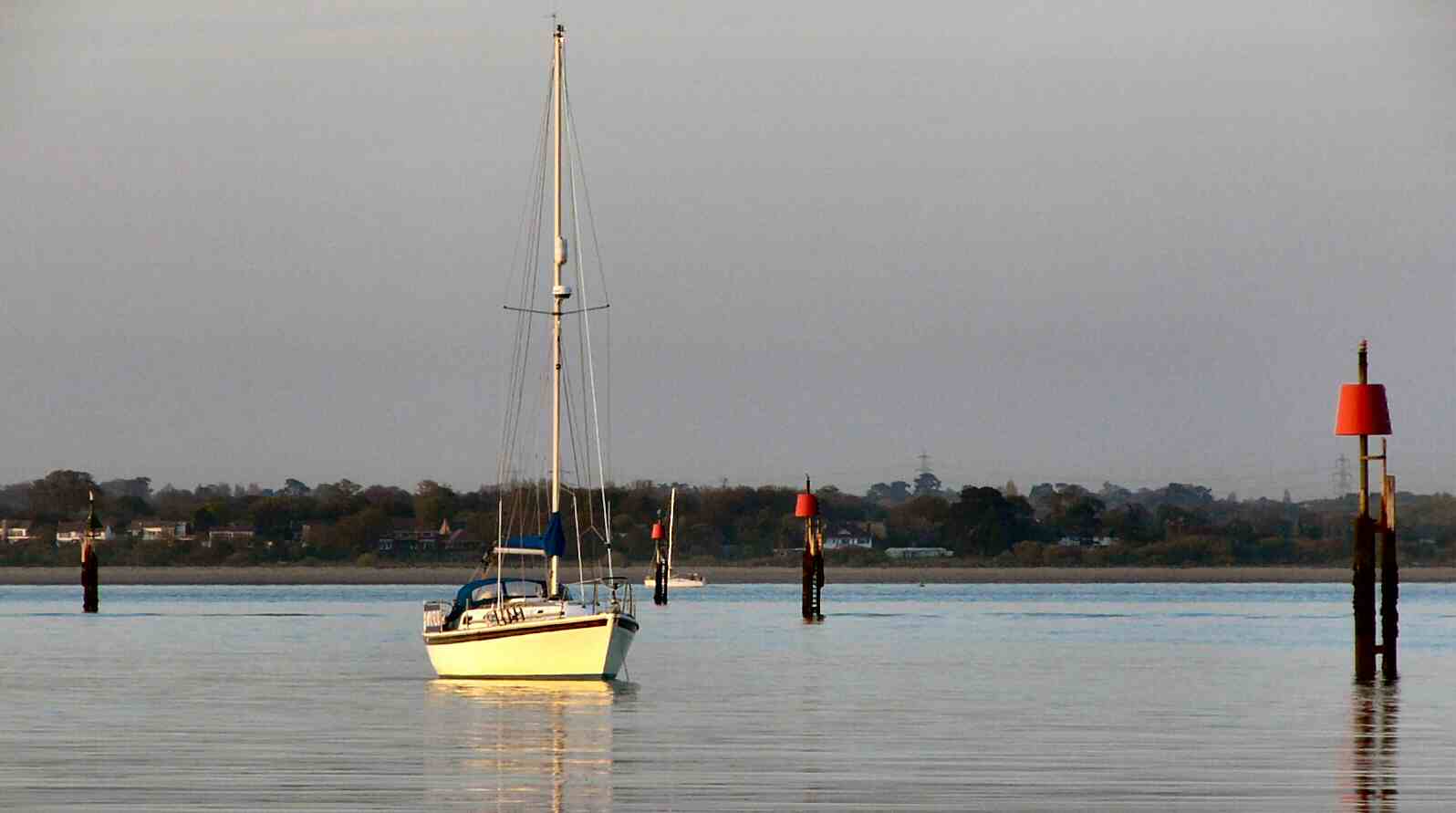 The entrance channel to Owers Lake, from the inside, looking out towards Southampton Water.

The view to the north from Owers Lake.

The view to the south from Owers Lake. From the left is Calshot lifeboat station, Calshot Castle and The Calshot activities centre.

Here are a couple of pleasant walks with, if you are lucky, a reward at the end. At the right time of year there are plenty of blackberries and sloes to be picked.